Compared to my usual, July has been a slow month in discovering music. Not only do I not find myself seeking out new albums to sample, but I also have been listening to the same songs over and over.

To this, I only have Big Boi to blame. 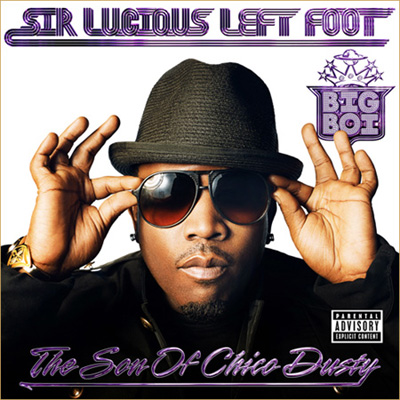 Ever since the release of Sir Luscious Left Foot: The Son of Chico Dusty earlier this month, the album has been on non-stop rotation. Hip hop is by no means my first love and I’ve sort of developed a short attention span even with seminal hip hop records. But this Big Boi record amazingly brought it, a well-produced and tightly packaged album from start to finish.

What’s great as well, is that fans weren’t let down by the anticipation for this record. A great deal of internet bandwidth has already been dedicated to how this is the hip hop equivalent of Brian Wilson’s Smile, an album that almost never got made. Disputes between Jive Records and Big Boi stalled this release for years, until Jive agreed to let Big Boi release this on Def Jam Records.

It’s a pity though, that Big Boi wasn’t allowed to have his Outkast partner Andre 3000 rap on this record. But thank God for the internet, Royal Flush, a song featuring Andre 3000 and Raekwon, still makes it to see the light of day.

It wasn’t that I was lukewarm to Christopher Nolan’s Inception that I waited weeks before catching it in theaters. Rather, it was the product of circumstance, the numerous events and gatherings that I had to attend to, thus explaining my initial failing.

But these reasons aside, I’m so glad that I was still able to catch it on the big screen. Inception was in a word, fantastic. I was afraid that it’d be one giant mindfuck of Lynchian proportions, but the film was careful enough not to delve into that, with the first third of the movie involved in explaining in careful detail the mythology of invading other people’s dreams.

What I liked about the succeeding action sequences is that it wasn’t intentionally played up just to arouse the audience. It technically is a summer blockbuster, but somehow, it doesn’t feel like it.

Much has been said about the all-star cast headed by Leonardo DiCaprio, but essentially, this is still Nolan’s film. There are times when I knew exactly what was happening and how the scene was shot, but I still can’t help but left feeling awed. Credit surely goes to the director in those moments. If Memento and the two Batman flicks are not enough to establish Nolan as one of the greatest directors of our generation, then certainly, Inception did more than enough to cement that.

I think the reason why I love this film so much is that days after the viewing experience, the story still lingers with you to the point of making you question the reality that you’ve known for years. Only brilliant art succeed in doing that, and make no mistake, Inception is undeniably the film equivalent of brilliance.

Often, I find myself listing down favorite places that I have recently dined in. This then got me thinking to what actually constitutes a good meal.

While thinking this through, I looked over my list of restaurants and realized that, all of my favorite meals have become meaningful not by virtue of the food’s flavor alone, but because of the shared experience of eating. The balance of tastes may be important, but good conversation tickles the senses as easily as great food excites the palate.

So I guess, the secret to any good meal is to enjoy it with the company of friends.

But the next question is, how to turn a good meal into an even greater one? To this, I think I found out the answer as well. And the answer, my friends, is to eat only when hungry.